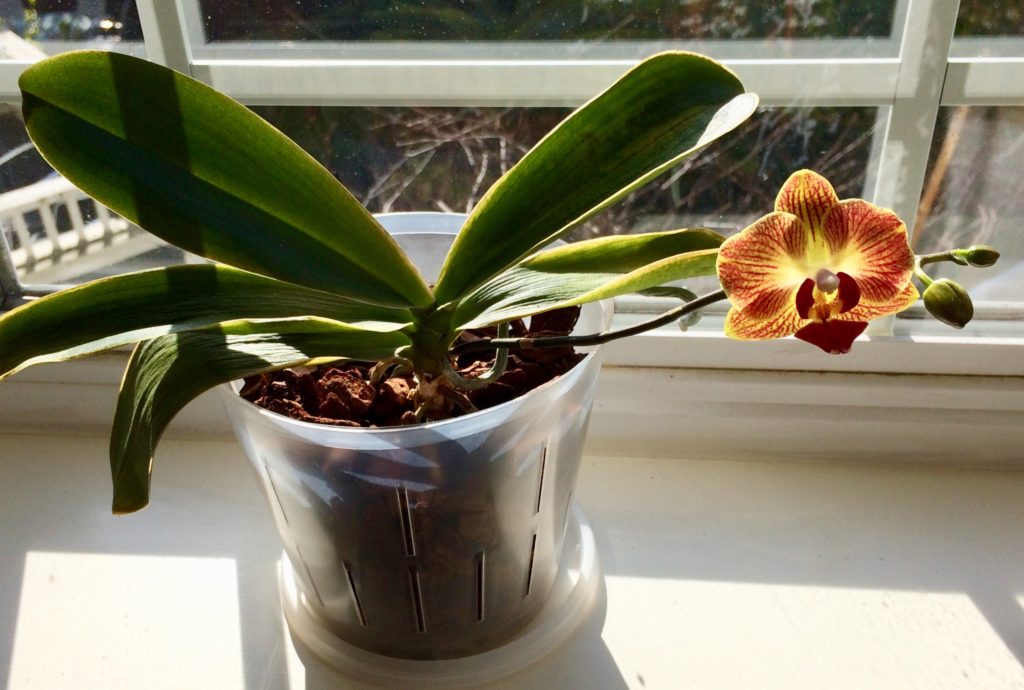 Some people want to keep you small.

And some people don’t realize they’re keeping you small, but they still do it.

Whether it’s the first reason or the second reason, the result is the same: you never bloom.

Let me tell you my story.

I came into my people’s life as a beautiful, young orchid. I had golden yellow flowers streaked with fine lines of deep maroon. My leaves were strong and deep green. I was in my prime. I felt I could take on the world.

That was eight years ago.

The first month or two was wonderful. My people admired me on most days and kept me on a window ledge in the living room where I got a good daily dose of delicious sunlight. It was glorious!

I was happy. Other orchids from the greenhouse had warned me about how negligent humans could be. Even though we hadn’t been out in the world yet, the humans that raised us would share stories about it and shake their heads. I felt so lucky that I had found a good home with good humans.

At some point, my flowers fell off. This didn’t scare me–other orchids had told me in the greenhouse that this was our natural process and I shouldn’t be scared of it–but I noticed that it made my people sad. I tried to tell them it was okay but they couldn’t hear me.

Then one day, the woman moved me to the bathroom. For some reason, she thought I needed humidity and moist air. But the bathroom was dark. Gone was the delicious light. I started to pull inward. Next thing I knew, there were tiny little bugs all over me. It scared me! Again, I tried to tell my humans I needed to get out of there, but they didn’t listen.

Even though the dark place was not good for me, and I was scared, I kept reaching for the light. I did all my best to grow, grow, grow. My leaves started to turn yellow and fall off, but my roots got bigger and longer. I tried my best to reach out and show the humans that I needed light. But they still didn’t listen.

Finally, after the bugs wouldn’t go away, the woman moved me out of the bathroom and back downstairs. I was so excited, I almost dropped a leaf just to show her how much. But instead of putting me back on the window ledge that I’d dreamed of for months, she put me on an end table in a corner. This place was dark, but not as dark as the bathroom. It was an improvement and I was grateful that I could finally get some light, even though it was never quite enough.

Things improved when the bugs finally went away, but something about being on the end table made the humans forget about me. The man never paid attention to me at all. In his eyes, I was gone. And the woman would often forget to water me, but when she would remember, she’d give me too much. I’d be parched one minute and drowning the next. To make matters worse, my roots were swaddled by mossy stuff that kept the water close and made me shiver. My pot was pretty but it had no holes in the bottom so the water had nowhere to go.

I tried to tell the woman I needed different potting soil and a pot with holes in the bottom but she didn’t listen. So, I kept growing roots to try to get out of the moss. I kept reaching, reaching, reaching for the light. I tried so hard for so many years.

After a while, I pulled inward and stopped growing. It was all too hard. I needed to save my strength just to survive.

Then something miraculous happened.

It was almost too good to be true. I tried to not get my hopes up. The woman was excited now but what if she gets distracted and forgets about me? Humans are always getting distracted. Sometimes I wonder how they even remember to eat and sleep.

But then, one day, the woman brought me out of the dark corner and placed me on the kitchen counter. She gently removed me from my pot. She gasped when she saw how many roots I had and how many were rotten. She looked at me with eyes filled with remorse and regret.

In that moment, I forgave her.

As she listened to another podcast about re-potting orchids, she started working on me. First she picked away all the moist, slimy bits of moss. Then, she got out a pair of scissors and snipped away my rotted roots. I thought it would hurt, and the first couple of snips kinda did, but after a while, it felt good. It was freeing.

Next, she brought out a new pot: a clear one with lots of drainage holes. I almost fainted when I saw that. When she filled the pot with wood chips and a little soil, and then nestled me inside while she added a bit more on top, I nearly died from happiness.

But that wasn’t all.

She watered me in the sink and gave me fertilizer. Sweet ambrosia of the gods! I’d never had such stuff. I couldn’t get enough of it. Finally, after I’d drunk all I could, she lifted me and my new pot out of the sink and onto a plastic lid. Then, miracles of all miracles, the woman placed me on a window ledge in the kitchen.

The sunlight here was even better than the living room. It was warm, diffused, and not too hot. I felt like I had died and gone to heaven. I had no idea that all my wishing and growing and reaching would result in this.

The pot had been my prison. My environment was killing me. But no one listened. Until now.

It felt so good on my window ledge. For days and days, I was well fed, well drained, and well taken care of. And one day, when I didn’t think it was even possible anymore, I felt myself sprout. Not another root–though I had grown some new ones by then–but a long, thin, green stem with a bud on the end.

I was blooming again.

The woman ran over and I will never forget the look on their faces when they both gazed down upon my bud that had started to open into a yellow flower. I started to cry. Tears of joy though, dear reader, they were tears of joy.

So, that’s my story. It has a happy ending so I hope it didn’t make you too sad.

Please remember this. No matter how many years you’ve been trapped in a dark place that’s wrong for you, things can change. When you change your environment for the better–whether on your own or with the help of other humans–you will change and grow and you will no longer be small. And someday, on a day when you least suspect it, you will bloom once more.

Peg Cheng is the author of Rebel Millionaire, a guide for how to retire as a millionaire even if you make a modest income, co-owner of Plaid Frog Press, and a career coach combining intellect with intuition. Born in Southern California to Taiwanese parents, Peg lives in Seattle.